A leading Australian financial services company set out to create a simple and elegant home loan solution. Within a few months of initiating the project, the company onboarded four ThoughtWorkers to streamline the software development process.

The result—a new inclusive experience that allowed a banker to complete an application for a customer in just 60 minutes. It was a significant improvement from the earlier average of several hours, shifting between multiple systems and re-entering data.

Investing in test automation and using Gauge helped improve the overall quality of the application and the user experience.

The challenge: Automation for better testing

We spoke with two team members—developer Raymond Biggs and quality analyst Maggie Zong—to get more details. As a client requirement, the team uses TestCafe to automate end-to-end testing. But, on it’s own TestCafe test scripts were hard to read and maintain. The TestCafe test steps weren’t re-usable either.

About six months ago, when Raymond joined the project, he noticed the gap—the team did not use a testing tool that matched their development style. He recalled using Jest and Cypress in previous projects. However, both had similar issues with reusability and maintainability and did not help new team members understand the behavior of the functionality they were testing. Also, all the developers in the team used VS Code, which meant that any new testing tool had to integrate well with the team’s choice of IDE.

Slicing the test pyramid with Gauge

Raymond proposed Gauge for test automation. Since no one else in the team had used Gauge before, he ran a proof of concept comparing it to Jest tests for the same functionality. The proof of concept showed the team how Gauge specifications, written in markdown, were much easier to write and read than plain Jest tests . That, along with Gauge’s excellent VS Code integration, a feature that enhanced the test scripting experience, convinced the team to choose Gauge as their test automation framework.

During our conversation, Maggie explained that Gauge is used by both developers and testers in the team.

We use Gauge tests across all levels of the test pyramid. While TestCafe drives the browser automation, it, in turn, runs within Gauge. Developers and testers write integration and user interface (UI) end-to-end Gauge tests. We also have tests that integrate with downstream services. Gauge specifications help document the business logic clearly within the tests. 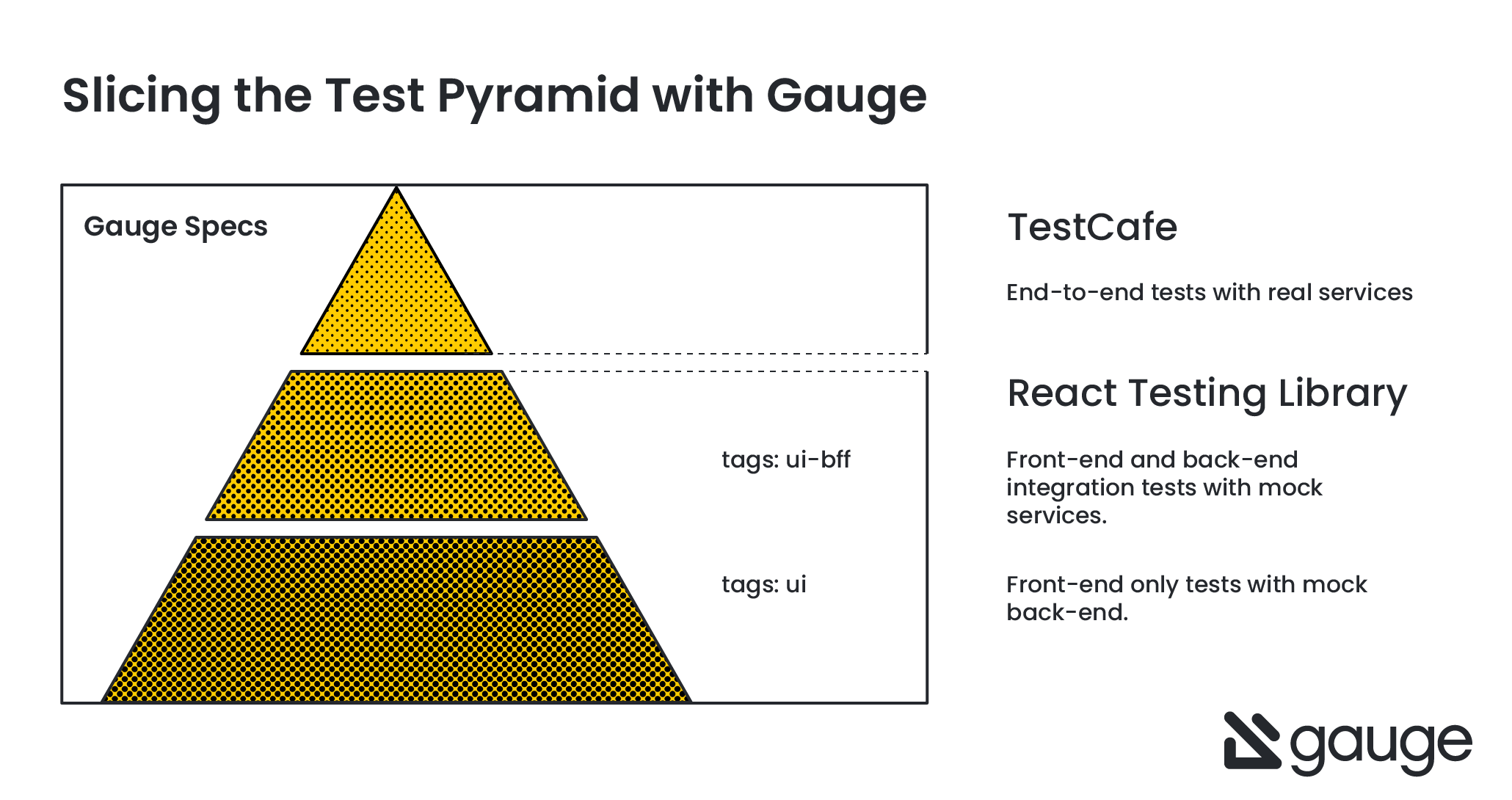 Both Raymond and Maggie shared how several Gauge features helped minimize defects and improve the testing and software development process.

Gauge is free and open source, and that was a crucial factor in helping them zero in on the tool.

Maggie pointed out that Gauge’s data tables feature enabled the team to reuse tests and write tests quickly. She explained,

Our application has many forms, so the table feature has been handy for us.

Raymond added that writing test data as markdown tables offered a standard format that was easy to understand, enhancing its readability.

Tags within Gauge are used to group specifications or scenarios. Raymond also highlighted that tags are great for slicing the test pyramid horizontally. He explained,

Using a combination of Gauge tags and execution hooks, the team were able to mix front-end only tests with front-end and back-end integration tests, within the same spec file.

Steps can be written without knowing if the scenario is a front-end only, or front-end and back-end integration test.

The tags at work in the specification file.

We use the Backend for Front End design pattern. By using a combination of Gauge tags and execution hooks, we mixed front-end only tests with front-end and back-end integration tests within the same spec file. We have a tag in Gauge for UI tests and we can run page-level UI tests by simply using these tags. Similarly, we have a service tag introducing real services into these tests. Tags help in slicing our test strategy.

The team used Gauge’s ability to run tests in parallel and this reduced testing time drastically. Gauge comes inbuilt with an option to turn on parallel runs without the need for any extra setup.

Gauge works on all platforms and popular programming languages. The team uses multiple technologies to test the new loan solution. Currently, the UI and UI BFF tests use React Testing Library, and the end-to-end web tests use TestCafe to drive browser automation. Raymond and Maggie shared that Gauge integrates seamlessly with these tools.

We wrote just one test, which had reusable steps. When creating more tests, we re-used the steps with data tables feature and tweaked the formula to test another scenario quickly. It helped us meet the strict client requirements faster.

For example, the step below uses a data table to register users with an underlying implementation of filling a form with the name, email and address.

This step and be re-used in another scenario without modifying the underlying implementation and only changing the data.

In contrast with Jest, Cypress and TestCafe, Gauge specifications are in readable and executable document format which also illustrates how an app works. It played a key role in helping the team pick pace, onboard new hands, and comply with strict auditing requirements.

The team successfully released the first version of the application to a pilot group of seven Sydney bankers. The client appreciated the rapid pace of system integration testing. Gauge had played a crucial role in speeding test automation. The team completed writing and running 18 end-to-end tests in just two weeks in the first round.

The second round took only three days to complete, pleasantly surprising the client, who had expected each round to take three to four weeks.

As development teams look to shift left with testing, choosing a test automation framework that is easy to write and maintain is crucial.