How Taiko compares to other browser automation tools

ThoughtWorks has been writing free and open source automated browser testing tools for over 15 years. Selenium RC was released in 2004, and WebDriver in 2007. Today, there are a lot of free and open source tools to automate browser based tests. Unfortunately, problems like flakiness and the cost of test maintenance have plagued this category of tests for a long time.

Over time, as users, we have opted for workarounds to deal with some of these issues. But sometimes all it needs is a different approach.

This year, the Gauge (by ThoughtWorks) team released Taiko 1.0, a simple NodeJS library to address some of the problems of browser-based automated tests.

Since we are a part of the team that built Taiko, our intention to compare is to discuss our rationale behind each point of comparison (along with examples) and how we think Taiko’s approach helps in each instance.

While analysing, we considered these parameters for a holistic comparison

The goal: Tests should change only when there is a change in functionality. A change in the structure of a web page should not impact a test validating functional correctness.

However, most browser automation tools create tests that are hard to maintain. That’s because they use locators like XPath, ID's, CSS selectors to identify and perform actions on web page elements.

These locators depend on the structure of a web page. The underlying structure can (and does) change frequently throughout the development process. Even minor changes in page structure break such tests. So, it increases the test maintenance costs.

Taiko allows you to select elements on the page based on what you see. It's not based on the specific underlying structure that only a developer sees.

This means, to click that "Purchase" button you can use click( "Purchase"). It's based on the text on the screen and not based on the specific style, location or hidden identifier.

Multiple matches can be resolved with proximity selectors or a combination of them. Yet, if this is unsuitable, Taiko has fall back options. You can choose to select an element on the web page via XPath or CSS selector.

Taiko’s API treats the browser like a black box. Tests written in Taiko are resilient to page structure changes as they minimise the need of using complicated locators.

This example compares scripts automating the TODO MVC application. The tests currently pass for the React flavor of the TODO MVC. However, only tests written in Taiko pass when they are run against the AngularJS flavor of TODO MVC. This is because Taiko focuses on testing functionality and not the underlying page or framework.

The goal : Eliminate the root cause of flakiness in browser based tests.

In modern web applications, elements on the page can dynamically appear and disappear based on user actions. For example, imagine clicking on a user's icon to display their photos.

However, many libraries expect the test code to handle the wait time to perform an action. Other tools provide some granular and low level controls to explicitly wait for elements or time however, it's hard to learn and use these controls.

“1 in 7 of the tests written by our world-class engineers occasionally fail in a way not caused by changes to the code or tests.” - Google Testing blogs

As shown below, both Taiko and TestCafe have very good implicit wait mechanism before performing actions. This reduces flakiness in tests. However, unlike TestCafe, Taiko also ensures that the performance of the test run remains good!

In case you want finer control, Taiko also has good fallback options to override the default behavior. You can define explicit wait for conditions for a given action in the test code to suit your needs.

In this example only Taiko and TestCafe don’t need any explicit waits. To observe flakiness, comment out all the explicit wait conditions in tests of other tools and run it a few times. A detailed comparison is available in the readme file inside the example.

The goal: Get fast and reliable feedback on test failures

Taiko explicitly chooses reliability over extreme performance. If this tradeoff is unsuitable, you can choose to override it to improve performance. Explicit waits can be defined for a given action.

In this example, we ran all the tests sequentially, multiple times, to compare performance across tools. Machine and other details of the run are available in the readme file of this example.

A shorter time and lower CPU indicate better performance. Here are some results of benchmark tests run in cpu with 8 core.

Testcafe’s execution time could be 16 seconds if there were no reloads between tests. Reloading added an additional 4 seconds to the test suite.

The goal: A testing library like Taiko must be able to take advantage of the rich testing oriented feature set provided by modern test frameworks like Gauge, Mocha, and Jest.

Taiko is a simple NodeJS library that can easily integrate with any Javascript test frameworks.

The goal: Tools must make it easy to collect contextual data to analyse test failures.

“The analysis part is normally done manually and if the analysis is not done correctly, there could be genuine failures that are overlooked or masked by other issues.” - 5 reasons why automated tests fail to find regression bugs

Apart from the default data available on failure, more contextual data can be collected with custom plugins.

Taiko’s plugin architecture allows you to extend it in ways that suit your requirements.

Users can use/build a plugin to suit the requirements to collect relevant data. Example:- screencast plugins capture video of the current run.

The goal: Ensure that tests run consistently across modern browsers.

Running tests across browsers adds significant overhead to both resources and test run times. We can avoid this overhead by choosing what to test. Modern Javascript applications, frameworks, shims and transpilers like babel do a good job of ensuring cross browser compatibility.

Like Puppeteer, Taiko also uses the excellent Chrome DevTools Protocol(CDP) to automate browsers. Both work seamlessly with Chromium based browsers.

The next version of Microsoft Edge is adopting the Chromium open source project. The Firefox team is working on adding support for CDP.

Taiko scripts are standards compliant and portable once browsers adopt these standards.

Below are the details of our key findings of the browsers supported with various tools.

The goal: The language available for authoring tests should allow users to write tests expressively.

Taiko only supports Javascript to author test code, because it’s built on top of CDP (Chrome DevTools protocol) and the best library for working with CDP is in JavaScript.

Here is the report of the tools comparison 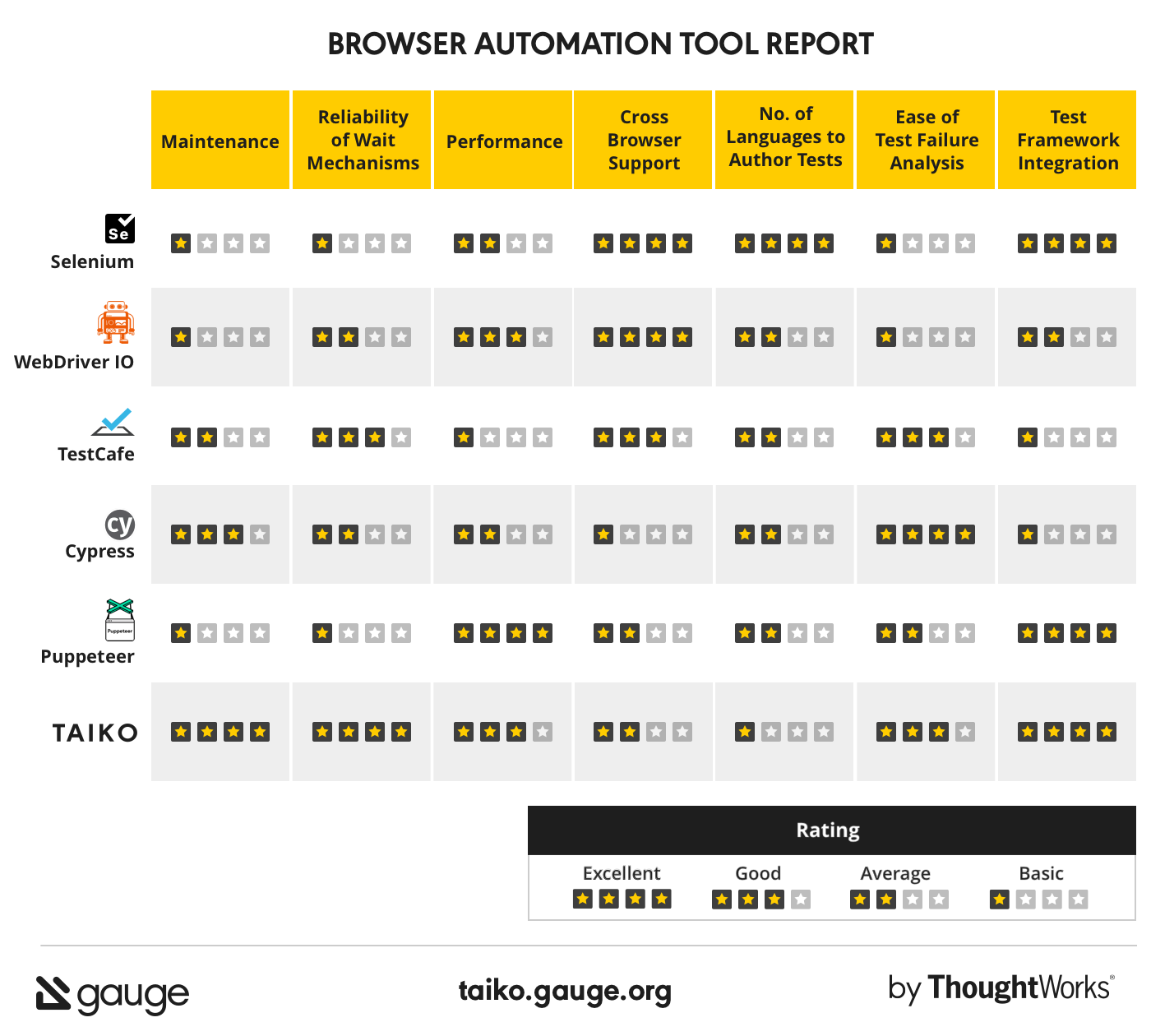 Check CompareBrowserAutomationTools, a GitHub repository to validate our claims made in this blog.

We hope you find this comparison summary useful! Through various examples listed above we can deduce that Taiko is a reliable, cost effective browser automation tool with a good performance. There will be pros and cons of using any tool. If you’ve come across a tool that isn’t in the comparison but solves a problem better, leave us a comment.

As always, the team welcomes any feedback that helps improve Taiko. You can install Taiko and explore more!